Foil-covered keyboards are the most widely used input elements in device and apparatus construction. Whether they have a narrow operating area with two keys or are a complete user interface with a large number of keys and additional elements, their robust design, flat insertion depth and the large degree of freedom in terms of their shape continue to make them customers’ first choice.

The almost unlimited flexibility in design is one of the major advantages of foil-covered keyboards. As a result, the design engineer can freely set the number of keys, their position and their shape on the device. Then there is the equally wide selection of graphical designs for the user interface. Foil-covered keyboards as mechanical switching elements firstly offer thin metal dome switches. Secondly, the switching mechanism works when the foil surface contacts the switching film below. Foil-covered keyboards are normally glued into place without a great deal of effort to integrate them within systems.

The variety of additional functions and properties that can be combined with foil-covered keyboards are what make them an attractive proposition. Coatings that repel biocides or liquids, different lighting options, capacity sensor elements or a double contact function are all available.

Please use the KSxxxx part number, not the longer TKS- code. Note: a normal desktop PC keyboard is about 470mm wide 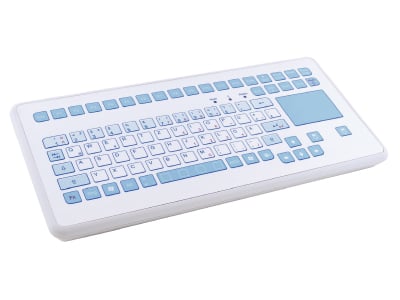 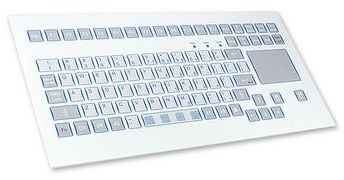 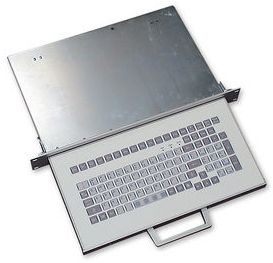 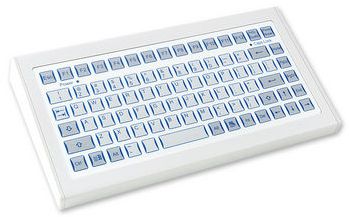 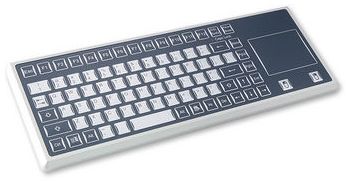 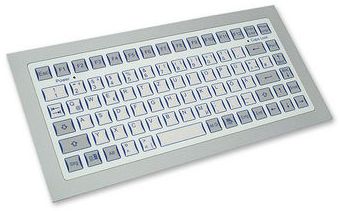 The A-KBIM2 is a industrial keyboard for rugged conditions.
The A-KBIM2 provides a full QWERTY keyboard with an integral joystick. It is designed for industrial environments and is fully sealed.
The joystick uses a patented opto-strain-gauge technology providing both an ergonomic and very durable pointing device.
The joystick also incorporates a ‘click in the stick’, further enhancing its ergonomics.
The joystick can be held between the fingers or used as a finger/thumb pad.
The keys are hard wearing membrane type with tactile feedback.
Construction is die-cast aluminium, powder-coated and painted (standard) or stainless steel (optional).
The joystick emulates a Microsoft® Mouse. It connects to a PS/2 port or USB with optional adaptor.
The A-KBIM2 is ideally suited to operator interface requirements in the mining, marine, defence,
petrochemical and food manufacturing industries as well as in medical operating theatres, process plants, flour mills,
cement works and smelters.
The A-KBIM2 is an Australian product designed and manufactured in Australia.

“Intrinsically Safe” devices have been specifically developed for use in hazardous areas where an explosive mixture of air and gas or vapor is or may be present.

“Intrinsically Safe” devices are incapable of causing an explosion in the surrounding explosive atmosphere. This generally involves adding protective components in series with energy storage devices. The purpose of the protective components is to reduce the risk of ignition due to spark or increased surface temperature of components.

These areas typically include mining, petroleum and chemical engineering plants and factories processing and storing gases, solvents and other flammable substances.

Intrinsic safety (IS) barriers are a core component of an intrinsically safe solution. Intrinsic safety barriers are devices that limit current, voltage, & total energy delivered to a sensor or other instrument located in a hazardous area. Limiting the energy prevents fires & explosions from occurring in areas with hazardous chemicals, gases or other ignitable atmospheres.

A flat membrane desktop keyboard with joystick in a metal housing, fully certified Intrinsically Safe to IECEx for Australian use.

More data on A-KBIM2-IS (this site)

AP-PSUSB ?? or
USBX2PS2 Cabac Please enquire
Use just one or both PS/2 ports to connect a keyboard and/or mouse
Works with A-KB-IM2 series